Change in supply is a big driver in the change in relative price within the greasy wool market. Change in demand certainly plays a role in terms of the cycles of economic growth but these tend to be longer, multiyear cycles. Wool supply is sensitive to seasonal conditions which can change year to year. With this in mind this article takes a look at changes in the merino micron category volumes for last season.

The 2021-22 season was interesting in due to the marked change in supply going on in Western Australia which was opposite to the mild changes in micron volumes seen in the eastern regions. Figure 1 shows the change in sales volume by micron (12 through 27 micron) for merino wool only last season. The changes shown are the changes between the full 2021-22 and 2020-21 season for the micron category of the specified region. The regions are broken up into Western Australia, pastoral production zones in eastern Australia and the rest (non-pastoral zones).

To provide a final supply perspective Figure 3 shows the full season breakup of merino sales by micron by region, in clean kg. The average merino fibre diameter for the season was 18.83 micron (19.2 micron in Western Australia, 19.6 micron in the eastern pastoral zones and 18.4 in the eastern non-pastoral zones). 98% of Australian merino sales in 20221-22 were between 16 and 22 micron with the eastern non-pastoral regions dominating the 18 micron and finer supply. For 19 micron and broader the supply more evenly spread between the three zones.

Supply is not expected to be a factor in pushing the relative price of different micron categories around this season. Demand might wane and result in lower premiums (and discounts) for micron but supply will not be there to accelerate or retard this process. 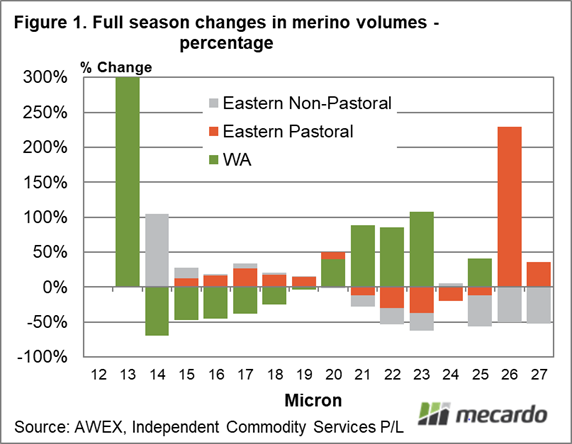 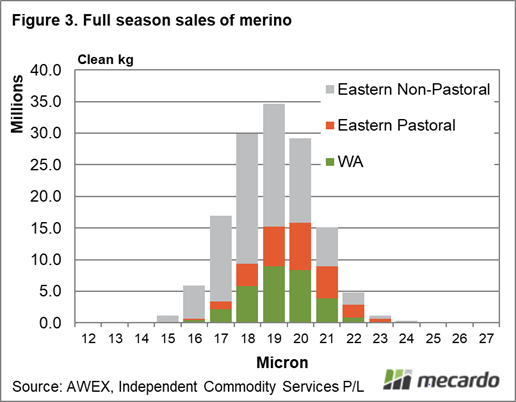