Mutton much to see here

The lamb market extended its state of calm for another week, with the key price indicators barely budging. The underlying higher supply combined with stable prices is positive, but the threat of extended Covid processing restrictions in Victoria looms large.

Processors took it up a notch last week with an additional 17K lambs slaughtered on the east coast (6% lift). Victoria was responsible for much of the rise, but the state is still yet to process at the full capped capacity under restrictions. That space was made available by low sheep supply. While there was a minor lift in east coast sheep slaughter for the week, up just 1 per cent, it’s still 45% under last year’s levels.

As reported by Angus Brown this week “with slaughter rising and prices rising, it suggests the market might have found a level where it can be moved into export markets”.  Yardings for the week ending the 4th of September certainly reinforced the message with lamb prices holding despite a 47% jump in yardings. The lift in sheep yarding’s was nearly on par, with 37% more sheep running through yards.

Restockers and light lambs received interest this week, with both national indicators gaining about 20¢. The National Mutton Indicator saw a 6¢ loss on the week to 525 which isn’t far from month ago levels. However, lack of demand for sheep in Victoria saw mutton prices there back 37¢ on the week.

Things will start to get interesting when the spring supply down south pushes processors in Victoria to their capped processing capacity. The BOM is tipping a very wet few weeks ahead with >50% chance of above median rainfall forecast for all except WA. If this proves accurate, there will be plenty of pasture about on the east coast, giving producers the option to add some more weight to lambs when the market eases. 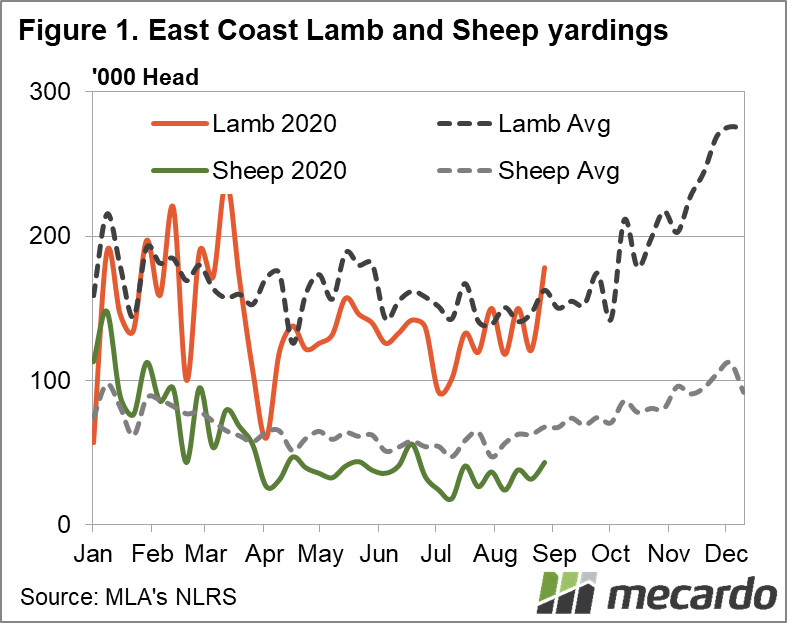