Philippines Pork shortage – can they handle the beef?

The Philippines hog herd had been decimated by African Swine Fever, putting pressure on pork prices within the country & increasing demand for imported beef. New government policy measures to encourage the importation of pork into the country stand to threaten what was a rapidly growing market for Australian beef exports.

The Philippines has been struggling with outbreaks of African Swine Fever (ASF), with 37 of 81 provinces in the country severely impacted, causing constraints on pork supply. Official statistics indicate that the total hog herd has fallen by over 3 million (24%) from 2020 levels to 9.7 million head at the start of 2021. The commercial piggery industry has been hit the hardest, with numbers dropping 41%, compared to domestic backyard pigs which fell by an estimated 13% (figure 1).

Unofficial industry estimates, however, are much more pessimistic, citing that widespread voluntary depopulation of pig farms and conversion to other enterprises could mean that total herd numbers have dropped over 36%. As a result, the price of pork has risen to extreme levels of concern for the populace. The Philippines government took emergency action in the form of temporarily imposing a mandatory price ceiling on pork for 60 days which ended in early April.

The price restrictions have been replaced by a suggested retail price of P270 ($A7.16/kg ) for imported pork shoulder, and P350/kg ($A9.30/kg) for bellies. In addition, tariffs on imported pork were slashed from 30% to 5%, and 15%, down from 40% for out of quota quantities for the next three months, though the plan is to progressively raise tariffs back over the next 12 months.

The local department of agriculture has flagged that it intends to raise the current pork import quota from 54kt to 400kt to further suppress the price of pork within the country.

Such a large increase in the quota has been criticized by the industry as out of proportion to the size of the household hog herd’s production within the country, and, if the proposal is enacted, has the potential to cause pork prices to fall more heavily than “necessary”.

Beef is a significant part of the Philippine diet, with soups and stews of Spanish influence featuring prominently in cuisine, particularly for family gatherings and Sunday lunches. As can be expected, higher-income earners consume higher proportions of beef as their protein source.

Meat & Livestock Australia research indicates that the Philippines has a relatively youthful population, with 42% of the population aged between 15 and 39 who are aspirational consumers who see beef as a superior meat worth paying a premium for. Among more affluent consumers, imported Australian beef is widely utilized in home cooking.

As the ASF crisis in the Philippines has intensified in 2021, imports of Australian beef accelerated rapidly. In March and April of 2021, the volume of Australian beef exported to the Philippines was 105% and 93% higher respectively, than the same months last year(Figure 2). High prices, retailers boycotting pork sales, and the rising fear in some communities of consuming infected meat are possible drivers toward alternatives like beef.

The number of households with disposable income over US $35K is expected to double over the next four years, meaning that demand for high-quality beef is likely to expand substantially in the medium term regardless of any contractions that may occur in the short term due to pork price corrections stemming from altered government trade policy.

Although the Philippines cannot be considered a major export customer for Australian beef, taking just 4% of our product year to date, in the last two months there has been significant growth. Government policy facilitating the importation of alternative animal protein into the country; namely pork is likely to dampen demand for Australian beef in the Philippines in the short term. However, with the number of wealthy consumers forecast to increase rapidly within the country; the fundamentals for beef demand are still strong for this market looking forward longer term. 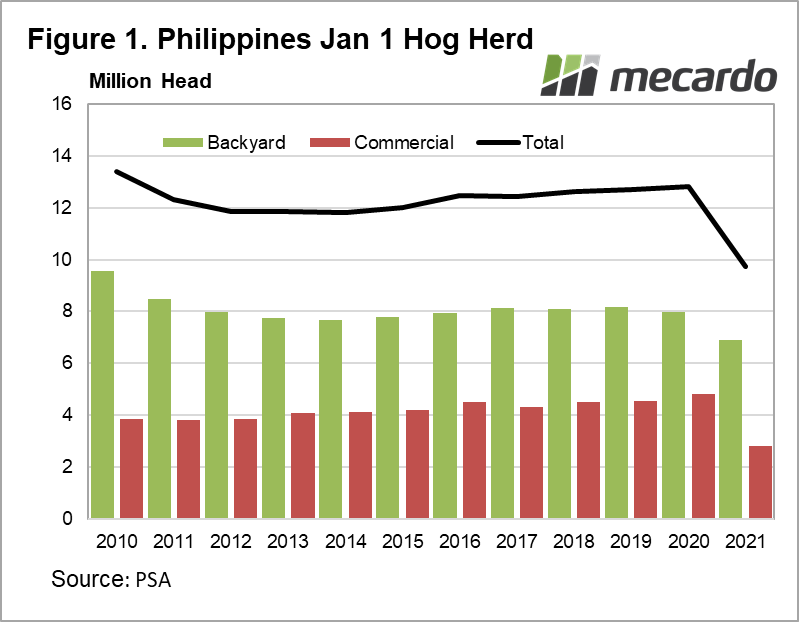