Last night, the USDA released their March quarterly stocks report. Typically considered a cornerstone in data for the coming season, this report didn’t disappoint. The actual numbers published were outside the average trade estimates and this gave the market the push it needed for another volatile night. (figure 2)

In short, corn acres came in well below the trade estimate, while beans came in well above.  Wheat area was lower than the trade estimate but still above last year.  The corn market reacted by hitting limit up most of the night as did wheat, which at one point was up 50c/bu, but neither market could sustain this momentum into the close.  Soybeans were sold off heavily.

The prospective planting guide was a reflection of surging input costs as opposed to cherry picking a commodity based on prevailing price.  The US farmer is choosing a crop that has lower nitrogen inputs.  The lower US corn acres is going to put pressure on already tight global stocks, especially when you take into consideration the loss of production expected in Ukraine.

The increase in soybean acres is unlikely to shift the needle too much on the wider oilseed market.  The South American bean harvest was trimmed, output of oilseeds from Ukraine is expected to be down 30-50% this year, and Russia has just announced a ban on sunflower seed oil exports.  It is getting hard to make an argument for a weaker oilseed market based on historically tight stocks and disruption to global trade.

Lastly wheat, while area was under trade estimates, was still an increase on last year.  The increased area of winter wheat was a known, however it was the smaller spring wheat acres that dragged the overall average lower.  This won’t do much to alleviate the tight global stocks, with major exporters holding around 14% stocks to use, similar to 2008.  Recent rain across the HRW areas of Kansas and Oklahoma should see crop conditions improve a little.  The northern US Plains where the HRS wheat is grown remain dry (as is Canada) and will need a good drink ahead of the sowing window to restore some confidence.

If you read this report in isolation you could be forgiven for thinking that the market is only headed in one direction.  Truth is that much will depend on the situation in Ukraine improving. Wheat is flowing out of the Black Sea (approx 2mmt per month) and big importers are still issuing tenders.  The market is still a volatile place and can and will behave irrationally at times. 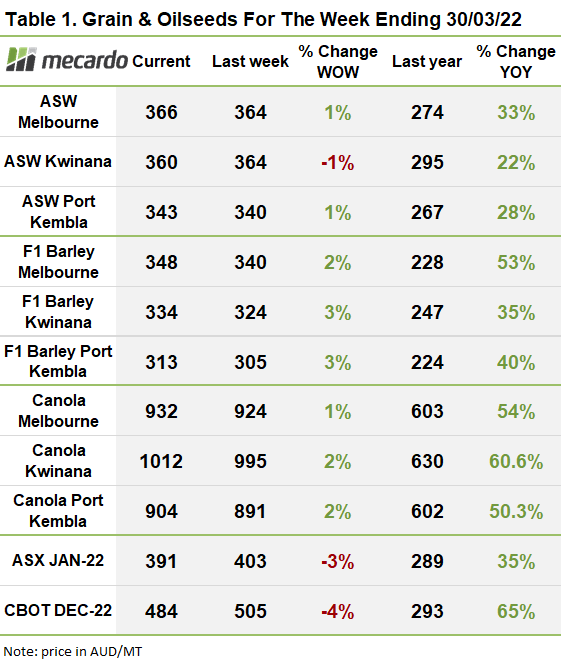