The quality of the wool offerings has begun to decline in line with normal seasonal supply patterns; this factor impacted the market this week producing a mixed sale result. AWEX reported that only 22.6% of the offering was style 4 or better. This resulted in the limited offering of better styles finding strong competition, while the lesser types lost ground over the week.

The Eastern Market Indicator fell by the smallest possible margin, giving up just 1¢ for the week, to close at 1309¢. Fremantle selling last on both days was the shining light, with the WMI posting a 17-cent rise, spread across the 18 to 21 MPG’s.

The market was supported by a weaker AUD over the week, losing 0.4 cents to close at US$0.775 which saw the EMI in US$ terms finish just 6 cents weaker to close at 1014¢.

Crossbred types fell, with AWEX reporting that this was the only sector to post across the board falls. In Melbourne the 28 MPG gave up 38 cents, while the 30 MPG fell 32 cents giving up all of last week’s gains.

Continuing their solid recent performance, Cardings were again up strongly in all centres; 25 cents better in Fremantle, while Sydney was up 11 and Melbourne improved by 21 cents.

A remarkably similar result to last week emerged in the clearance figures, 46,480 bales were offered, with 5.2% withdrawn and 9.3% passed-in, resulting in 42,155 bales sold to the trade. The weekly clearance for 2021 YTD (Jan, Feb & March) has been above 40,000 bales per week for all but one week, which has continued to lift the weekly average for the season. Currently, the weekly average sits at 32,300 bales, over 5,000 bales per week more than for the 2019-20 season average. However, the impressive result for the YTD of 41,800 per week bodes well for sales and price support for the coming months.

This week on Mecardo, Andrew Woods took a look at the makeup of the Tasmanian clip. The clip has on average been 1.3 microns finer than the national Merino clip during the past decade, which translates using MPG’s to a higher price of 12%. In terms of quality schemes, the Tasmanians have much higher adoption levels than the national Merino clip, with the rates of adoption higher for the finer micron categories.

Another big offering of 53,357 bales is listed for next week, with Sydney & Fremantle selling over two days on Tuesday & Wednesday, while Melbourne has a three-day sale. It is likely that the increasing volume of lower quality wool will weigh on the market, however, any better style lots are likely to find strong support. 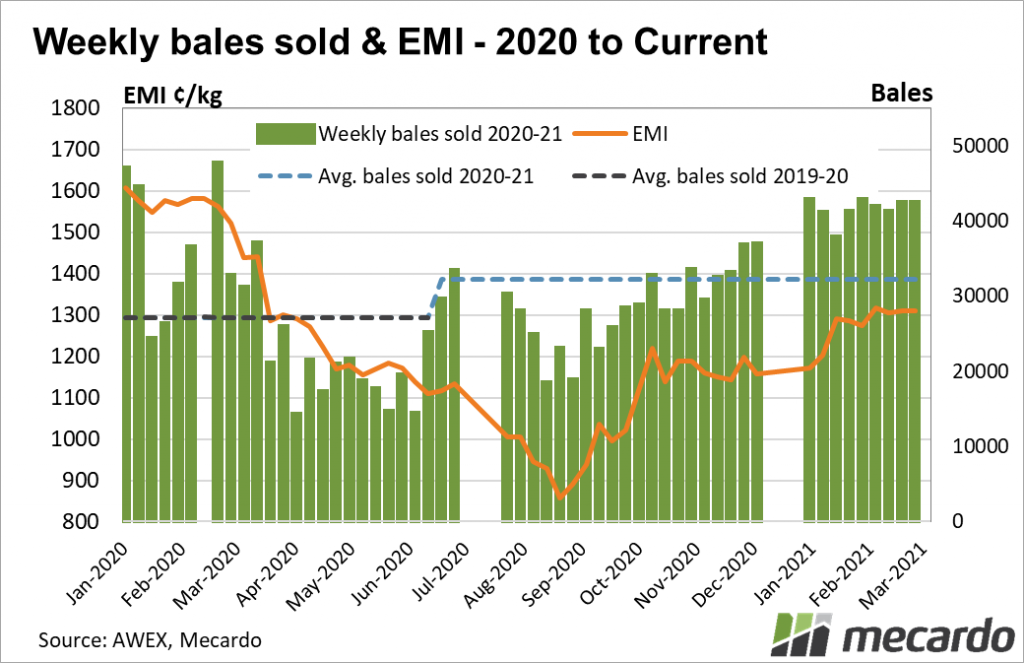