RWS premiums in the merino market

Demand for RWS accredited wool continues to roil away with demand flowing upstream from retail brands, without having secured supply. The consequence is that premiums have to be paid for RWS accredited wool. In late September Cape Wools began to incorporate reporting on RWS premiums in the weekly market reports of the South African greasy wool market. This article takes a look at this report and comparable Australian premiums.

In mid-August Mecardo looked at the makeup of the South African merino clip. It showed that between 18.5 and 21 micron South African sales volume ranged between 14% and 20% of the Australian sales volume. The clip tends to be shorter in staple length (more frequent shearing) hence it will tend to have a higher staple strength.

Cape Wools publishes a weekly market report for the South African greasy wool market. In late September Cape Wools began publishing the percentage difference between RWS and non-RWS merino fleece, with a staple strength 29 N/ktx and higher and a staple length 68 mm and longer, with vegetable matter 1.5% and less, by half micron increments ranging from 17 through to 22 micron, where data was available. The weekly market report also shows the overall proportion of RWS merino wool sold. Since late September some 30% of the South African merino clip has been sold accredited RWS.

The price differences quoted by Cape Wools for last week are shown in Figure 1 along with the price differences for comparable eastern Australian merino fleece with a higher staple strength (minimum of 38 N/ktx), a maximum length of 95 mm and no subjective faults (such as cott, water stain and so on) – RWS accredited wool versus non-RWS accredited non-mulesed wool. There is more data in the South African market so there are more published price differences but the Australian (mainly) premiums stack up against the South African differences. While the premiums are in the 5-10% range for 18 micron and finer categories, they increase to 20-24% for the broader Australian merino micron categories.

Figure 2 uses October data to compare the average price difference (premium) for RWS accredited higher staple strength merino fleece and the proportion of wool sold (with the selected characteristics) which was RWS accredited. Again, the difference is between RWS accredited wool and similarly specified non-RWS wool which was declared CM-NM. The RWS proportion is shown by the line and is quite high for 15 micron (41%), falling as the micron increases. By 20 micron the proportion of RWS wool was 0.4%. The premiums tended to increase as the proportion fell. Keep in mind some 30% of the South African clip is RWS accredited which corresponds to 5-6% of the 18-21 micron Australian volumes, so the high premiums being seen for 19-21 micron are based on low volumes of wool even with South African and Australian wool combined. That negative correlation between premium and proportion of wool accredited indicates that with increased supply the high premiums for broader merino micron categories are likely to shrink.

Demand for RWS wool is obviously strong enough for some large premiums to be present in the greasy wool market. These premiums look to be negatively correlated with the proportion of wool accredited to RWS which makes sense – the less there are the higher the premium. This also indicates that with increased supply the premiums are likely to shrink but given the size of the premiums there is plenty of scope for them to shrink and still be attractive. 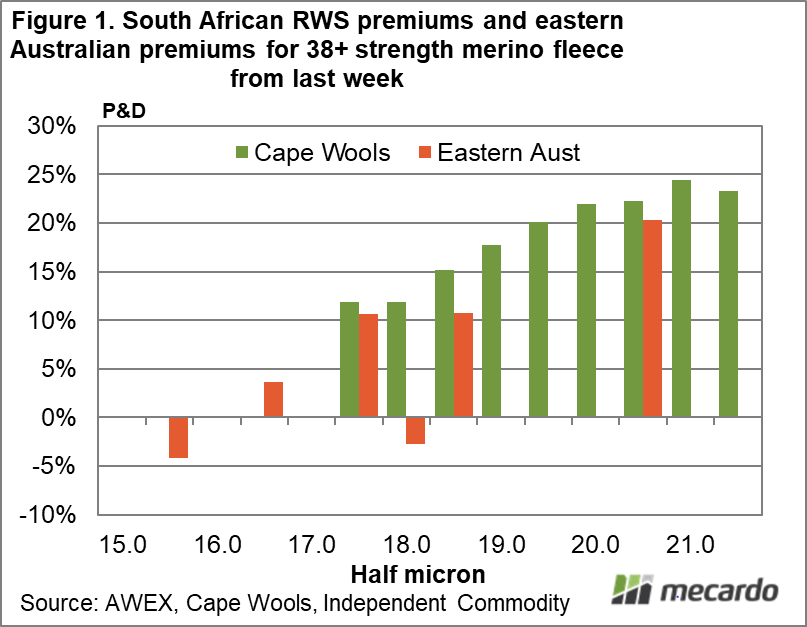 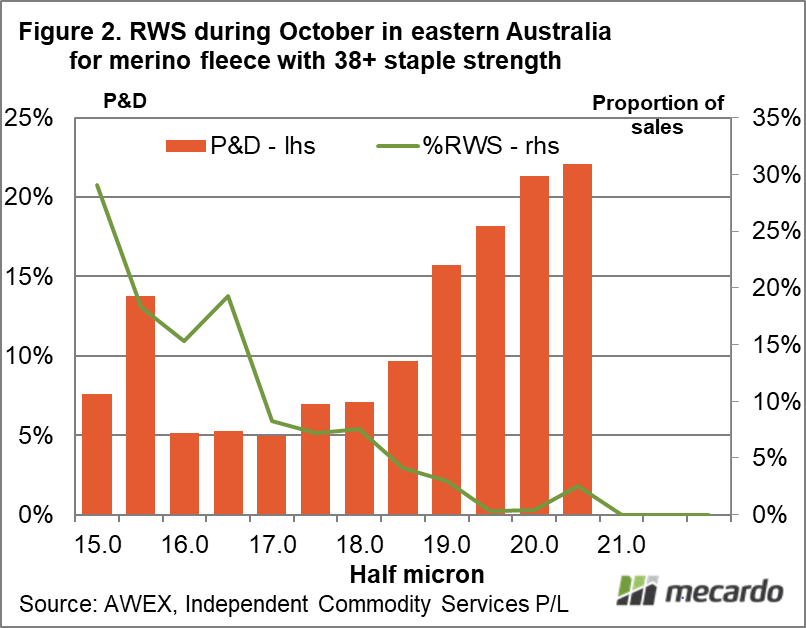