Australian live cattle exports have started 2022 sluggish, with figures for January to April (latest available) showing significant decreases. And while several ships left Darwin earlier this month, the Northern Territory Livestock Exporters Association (NTLEA) are reporting that trade will almost halt with Indonesia for the remainder of the month because of the foot-and-mouth disease outbreak in the country. This comes as live cattle exports had already hit a nine-year low in 2021, falling 26% year-on-year, and 25% below the five-year-average.

Indonesia’s agriculture ministry is reporting that more than 20,000 animals across 16 provinces, or states, have been infected with foot-and-mouth disease, and this is causing importers to shy away from bringing more cattle into the country. Despite this Indonesia remains Australia’s largest live cattle export market for 2022 so far, with nearly 60% of the market share. For the year to April, nearly 98,000 cattle have been exported to Indonesia, while total live exports out of Australia are at about 164,000 head. Exports to Indonesia for the first four months were 29% lower than the same period in 2021 however, and nearly half of the number sent from January to April in 2019.

Looking to other markets, live cattle exports to China have actually risen year-on-year and currently make up about 25% of the market share. With more than 40,000 head sent to China so far in 2022, this volume is more than 35% above the five-year-average for the same period, and about 6,000 head more than the same time last year. Vietnam exports, however, have plummeted with just 5,250 head of Australian cattle received there for the year-to-April, down from the five-year-average figure of more than 60,000 head – a drop of 91%. That follows on from total live exports to Vietnam in 2021 almost halving year-on-year.

Meat and Livestock Australia has recently developed a live export price indicator (LEPI), which will be generated once a fortnight. It draws on data provided to the NTLEA from live exporters who operate in the Indonesian feeder cattle market. The LEPI is the average sale price for feeder steers and bulls shipped out of Darwin in the 280 to 380kg liveweight category, which was sitting at 470¢/kg (Australian) at the end of May. According to MLA, the LEPI reached a high for the calendar year so far of 543¢/kg in mid-February, having started 2022 at 448¢/kg.

Live cattle exports haven’t been this low for the January-April period for at least the past 12 years and are 47% below the five-year-average. Concerningly, Indonesia has made up a majority of the trade so far in 2022, and all reports indicate that market is about to stagnate. Vietnamese demand has also continued to fall this year, with Australia’s strong domestic prices encouraging that market to look towards Brazil.

May and June numbers may pick up in line with a lower live export price, driven by the end of the wet and more cattle heading to ports, those overseas market factors will likely keep a lid on any significant uptick in live cattle exports in coming months. Continued excellent seasonal conditions in Australia’s southeast, and low overall herd numbers, will however go some way to help counteract wider industry impact. 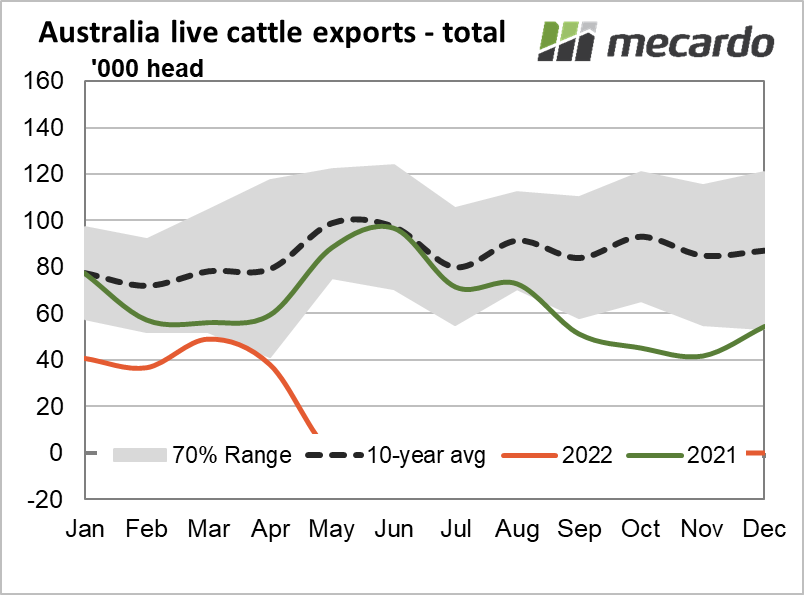 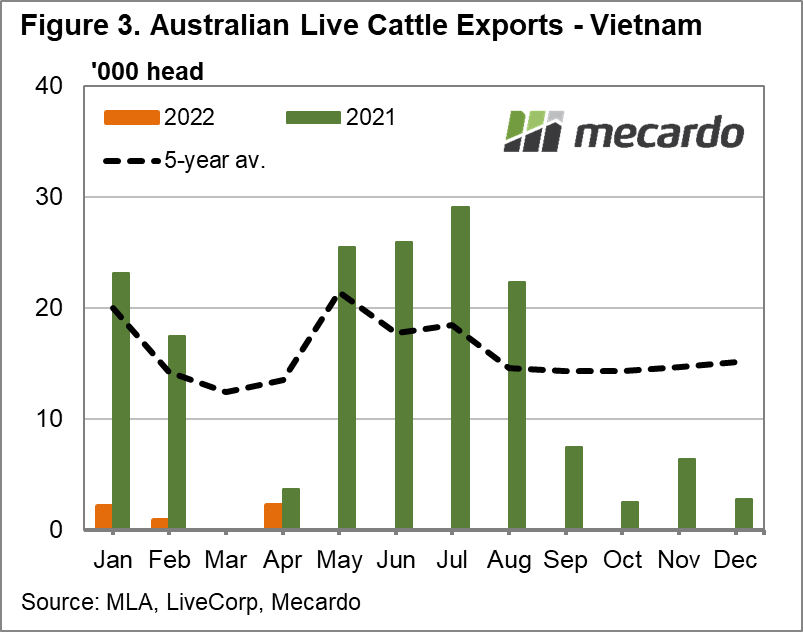