Just when you thought the grain markets were stabilising, in the words of Brendan Dart (Dartboard Commodities), the “USDA rolled a hand grenade under the table”. The September stocks report came out late last week and blew everyone out of the water, with some significant adjustments which have left more than the odd person baffled.

Soybeans were significantly tighter than last year and below trade estimates as well.  This one might have been expected, as the managed money positions are a record LONG (bought contracts) indicating to me at least, that the spec crowd was expecting tighter stocks and higher prices.  This puts heavy emphasis on the South American crop and any weather/production scare could really rattle the market.

Corn also came in under trade estimates with the assumption being higher feed demand/consumption. The June’20 stocks report indicated a supply surplus of close to 3bbu, so something sub 2bbu makes it feel tight (it isn’t, but perception is everything).  Rumours are swirling that China has a corn issue so future demand will be closely watched.

Wheat was modestly tighter than the trade expected, but the ensuing rally made it seem like the world was running out of wheat.  It seems totally out of context with the large global supplies on hand, but there you go.  It seems to me that the market is factoring in either a) reduced acres in the dry Black Sea region, or b) reduced production leading into the 2021 season.  There is little to correlate a poor seeding period with a poor final production year.  In fact, a dry and warm winter period significantly helped Russia’s production last year.  Russian winter wheat is around 70% planted and on a similar pace to last year (a record fast pace).  The 10-day forecast remains dry and is a bull flag to watch.

There is a lot to play out with South American production not to mention the Black Sea.  This rally will need some more bullish news to keep climbing, and a dry forecast could be just what it needs.  A change in the forecast will likely see a round of profit-taking.  Nevertheless, it is providing a nice opportunity for Aussie farmers to price leading into harvest. 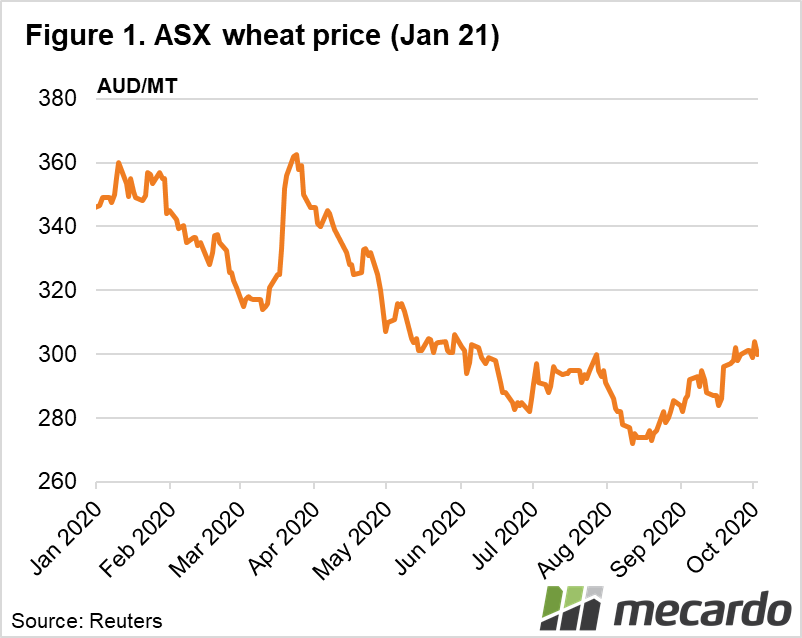