Two steps forward, one step back

This week the uncertainty of the wool market was apparent. Despite unsubstantiated rumours of possible Chinese government import bans, the wool market bounded out of the stalls on Wednesday following the Melbourne Cup holiday. The EMI jumped 7.5% or 6.9% in US$ terms on the opening day with AWEX reporting that across the board the Merino types were plus 100 cents dearer. To reinforce the uncertain market conditions on the final selling day the EMI gave back 2.9% with all categories quoted cheaper as buyers drew breath.

The Eastern Market Indicator (EMI) for the week rallied 50¢ to close this week at 1188¢, a 4.4% lift for the week. This puts the EMI market rally since the beginning of September (which was the low point of the season) at a 38% gain, with the EMI gaining a net 330¢ over a 9-week period. The AUD was marginally higher at US$0.718 which saw the EMI in USD terms clawing back most of last week’s loss closing at 853¢. Fremantle followed a similar pattern to the east, with a positive 36¢ or 3.0% rise for the week and now sits at 1217¢.

All types benefited as the price rally was across the board, with the Merino types gaining between 4 & 7%, with a standout performance from the 19.5 MPG to post an 83 cent or 6.6% rise for the week. Crossbred types paired back some of last week’s fall with the 28 MPG plus 30 cents or 5.1% for the week. Crossbred wool has been a quiet achiever since the September low, with the 28 MPG price now 215¢ or 53% higher.

Cardings were generally steady with minimal movement over the week, however, AWEX reported on Tuesday that lower VM & “better colour” locks and crutchings were keenly sought.

A slightly lower offering to last week of 33,248 bales came forward, however 30,237 bales were sold, 2,542 more with a pass-in rate of 9.1% nationally.  Of interest was on day one of the selling week, across the three selling centres just 403 bales or 2.6% of the offering was passed in, with Fremantle the highest clearance rate selling 98.3% of bales offered.

While the uncertainty of the COVID-19 pandemic has disrupted the wool market there is a strong feeling that the medium to long term outlook for Australian wool is strong; supported by growing demand with an appreciation of the “naturalness” of wool, and historically low supply which should overall be supportive.

The emergence of rumours regarding China import restrictions at this stage is without any substance or fact, however it underlines the nervousness of commodity markets in general in these times.

As one exporter noted this week, “we are just trying to avoid the highs & lows of this volatile market!” This is probably sound advice for wool growers selling at this time as well.

An even larger offering of 41,969 bales is rostered for next week with all centres selling on both Tuesday & Wednesday.

All industry participants are anxiously waiting for a lead from processors as to where the market goes from here. 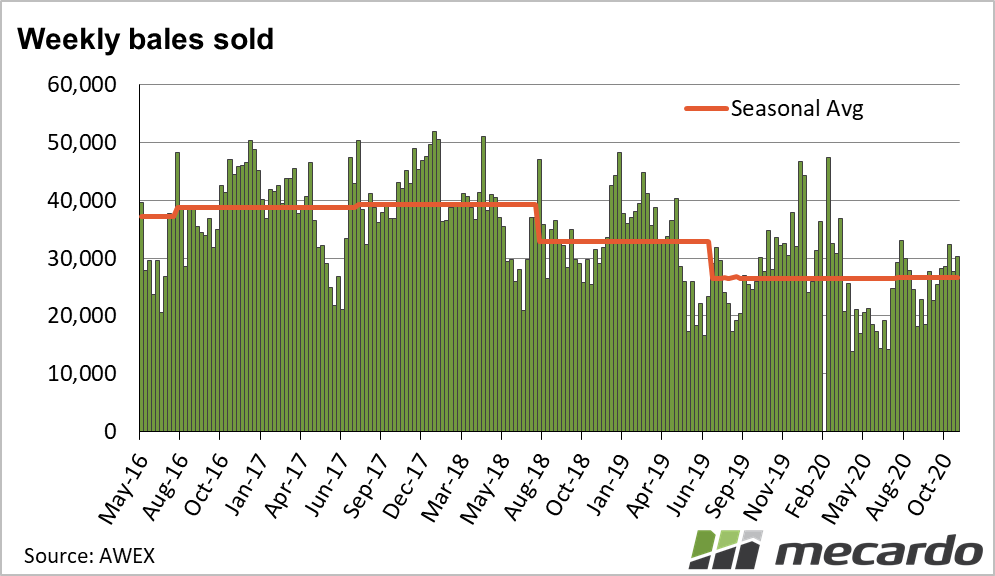