After reaching a record high last week, the EYCI has edged back slightly. Restocker steers fell back marginally but processor steers continued their slow march higher. All is not looking well in US markets, with the 90CL plummeting 4.7% despite a supporting weaker Australian dollar.

East coast yarding’s plummeted 12% on last week, pushed downwards by a 24% decline in QLD and 12% reduction in NSW, but partially offset by a lift in VIC of 24%. Overall, yardings fell by 4,597 head on the prior week, we saw 32,862 cattle yarded on the east coast for the week ending 9th October, which is 25% below the 5-year average.

Slaughter numbers dropped 14% from last week, notching up the third straight week of declines. QLD was responsible for the lions share of the fall, coming off 20%, while NSW and VIC followed suit, both sliding 8%. A total of 88,758 cattle were processed, for the week ending the 9th October, which is 29% below last years level.

A mixed bag on the categories this week, with restockers falling back slightly after their big run up of 10% cumulative gains in the last few weeks. While feeders and processors have continued their slow but steady upward trek; heavier beasts fell out of favour slightly.

Medium and heavy steers also showed minor weakness, falling back 9¢ (2%) and 1¢ (<1%) to finish the week at 369¢/kg lwt and 376¢/kg lwt respectively, with heavy steers now at a 10% discount to processor steers, double the spread we saw two months ago.

The Aussie dollar fell heavily, down 2% on expectation of another rate cut from the RBA to 0.709 US.  The 90CL frozen cow price has continued its backward slide; losing 31¢ (5%) to finish the week at 622¢/kg swt despite the bolstering support of a falling aussie dollar. The 90CL frozen cow price fall is not a big surprise though, as the US summer grilling season is now over, and smaller, less well capitalised US foodservice venues have still not recovered from COVID-19. We can expect further falls in coming weeks as the US begins to cull lean cows, boosting their domestic production, especially since US pasture conditions are reported to have been deteriorating for months now, and drought is present in some regions.

VIC and NSW are in for some respectable rainfall next week, which will help strengthen the pasture feed positions of producers at a time when the grass growth rates are at their peak. Given that we seem to have already hit the seasonal mid-October slaughter and yardings trough, we should expect to see a sharp pickup show up in the numbers next week. 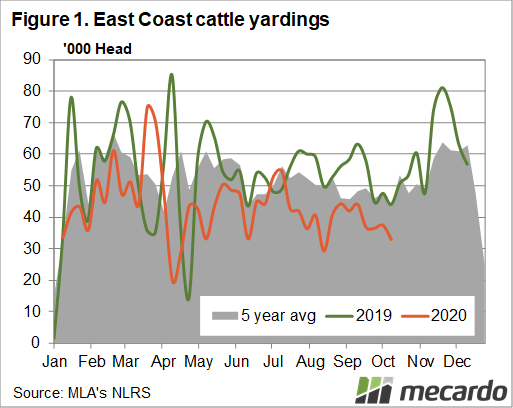 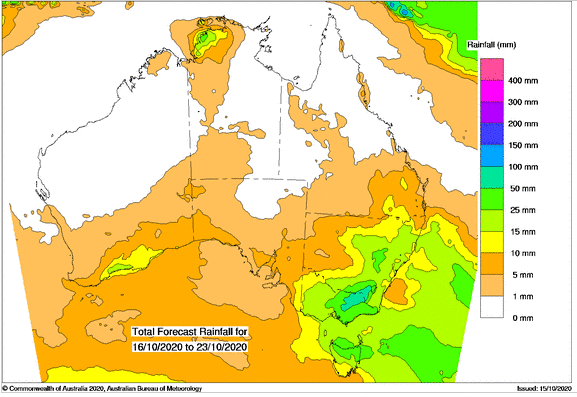