As Australia’s second largest beef market in 2020, consuming 211,000 tonnes of our product for the year, the US remains a good indicator of what is to come in the Australian cattle market. And despite taking 16 per cent less Australian beef in 2020 - compared to 2019 - the beef export price for the year rose 11 per cent, thanks to their low supply and a climbing Australian dollar. The price for beef headed to the US is still being supported by limited global supply, but America’s domestic herd numbers are likely to keep returns from reaching last year’s highs.

The 90CL price closed last week at 619¢/kg, a small rise of 5¢/kg on the previous week, but 20 per cent lower than the same time the previous year, increasing the AUS-US price divide further. Usually the Australian Medium Cow price reacts to movements in the 90CL price, but our domestic herd rebuild swinging into gear means the two prices are now historically close.

The Medium Cow indicator – at 525¢/kg – is 23 per cent higher than last year, and just 16 per cent below the 90CL price. To put this into context, the price difference between the two at the same time in 2019 was 45 per cent (in the 90CL’s favour). The wholesale beef price in the US is expected to head higher as they enter their spring and summer grilling season, but domestically there is very little putting downward pressure on cow prices in Australia, meaning the price differential may stay where it is for now. .

Slaughter numbers continue to fall locally, especially the female portion, while the US heads in the opposite direction, with the beef cow slaughter rate and number of cattle on feed higher year-on-year. Australian total cattle slaughter fell 21 per cent in 2020, and figures for the first month of 2021 are trending well below the five-year average.  The latest slaughter report, for week ending 22 January, has numbers down by 38 per cent on the same week last year, with female figures for NSW and Victoria back 36 per cent and 37 per cent for that same period. In Queensland, female slaughter volume was down 71 per cent. This has led exports to the US for the month of January to be the lowest volume in a decade, and 54 per cent lower than January 2020, according to the Steiner Group’s latest report out of the US.

The latest biannual cattle inventory out of the US will be released later this week, giving us more of an insight into how their herd is placed heading into 2021, and in turn, a forecast of what their import demand could shape up to be like this year. Steiner is predicting a rise in US feeder cattle prices this year, which could equate to lower beef cow slaughter domestically for them. Beef volumes out of their other suppliers is also uncertain, with China competing strongly for Brazilian product now. These factors will all dictate how much longer the US will pay a global premium for Australian beef. 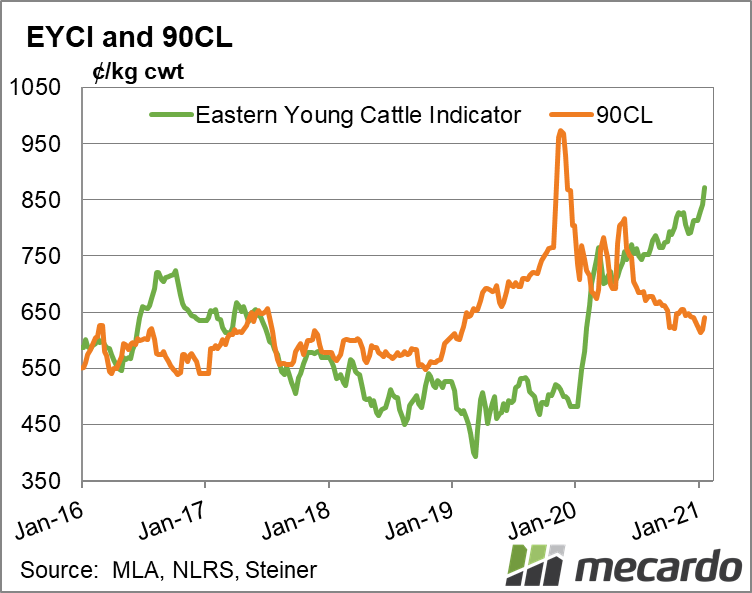