There is the well noted ‘fight for acres’ between sheep and cropping, especially in the sheep/wheat zones of the country. Cropping has been winning for decades, with the sheep flock on the decline. There is a smaller battle, however, between Merinos and meat sheep. We received a query recently as to whether the wool price crash is going to see a lift in slaughter lambs.

Back in April we took a look at the falling wool market and relatively strong lamb market and surmised we might see further declines in the wether flock. Even with the recent fall in lamb prices, the relative price of wool has hit new lows (Figure 1).

Low wool prices have historically led to increases in cropping area, but the drought and subsequent destocking have left plenty of room for more sheep now. The question we had is how falling wool prices are going to play out in the mix of Merinos and meat sheep going forward.

The theory is that low wool prices, both in absolute terms, and relative to lamb and mutton, will lead to more Merinos being joined to terminals, and meat maternal flocks being bred up to replace Merino flocks.

The Australian Bureau of Statistics (ABS) Agricultural survey gives us the best data for looking at what type of sheep are being joined, and lambs being produced.  Simply looking at the lamb crop doesn’t give a clear picture, as it fluctuates wildly with seasons, and this impacts both Merino and meat sheep.  We can, however, look at changes in types of lambs marked, and how this relates to the wool/lamb spread.

Figure 2 is a little complicated, but it does show up a trend towards more ‘other’ lambs when the wool price is low relative to lambs.  Figure 2 shows the year on year change in lambs produced and the average 19 micron wool premium over the Eastern States Trade Lamb Indicator (ESTLI) for the previous year.

Figure 2 shows that the 2019-20 wool/lamb spread hadn’t fallen too far, and as such there shouldn’t be a large change in relative lamb production.  However, if the wool lamb spread stays under 100%, as it finished the first half of 2020, we can expect a swing towards meat lambs next year.  The impacts on price will begin to be felt in spring 2021. 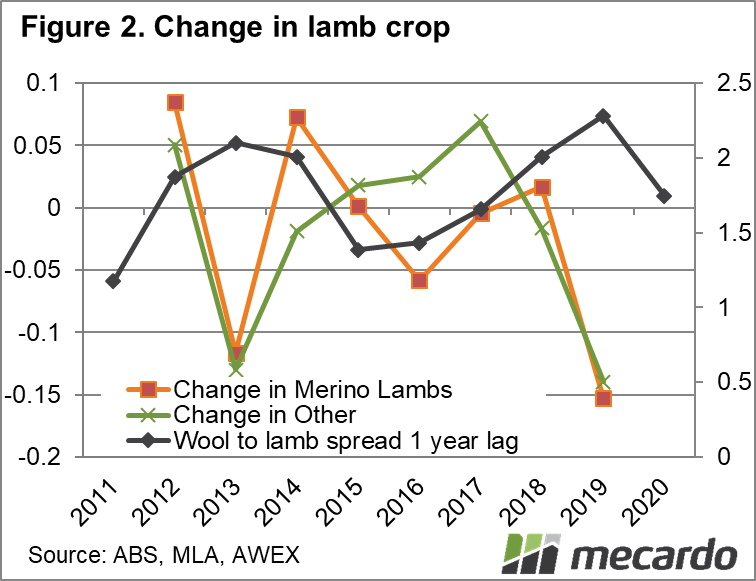