Following on from last week’s article where we looked at chickpea production in Australia, we now look at this crop through an international market lens and consider the factors that influence our key export markets.

In Australia, compared to the main broadacre crops like wheat and barley, Chickpeas are almost a speciality niche crop. Domestic consumption is minimal and our production is mostly exported in 20” container lots of around 25 ton, with typical transaction sizes in 125 tonne clips. Bulk shipments of 10-30kt are rare but do happen from time to time.

In the international marketplace for human consumption, aesthetics rule, with light coloured, even shaped chickpeas preferred in key whole seed markets like Bangladesh, with chickpea dishes featuring prominently in Ramadan feasts. Because Pakistan tends to split their chickpeas, aesthetics is less important in that market.

Queensland has a natural quality advantage over northern NSW, as QLD grown crops tend to be considerably lighter coloured due to warmer, dryer weather during critical phases of crop development. NSW crops tend to be greyer in colour, a symptom of wetter, colder weather.

The Australian Kabuli crop is small, currently at less than 10% of total production, although it has been larger in the past.

On the international stage, Comtrade data (figure 1), indicates that Australia has been one of the largest exporters of chickpeas in the world over the past 5 years, second only to Russia last year, which produces mainly Kabuli chickpeas. Our key export markets for chickpeas are now Bangladesh, Pakistan, and the United Arab Emirates, plus a collection of smaller destinations including Canada and the UK. Collectively, Pulses Australia predicts these markets are expected to take around 400 Kt, leaving an expected surplus in excess of 200K which will be stored and carried over into next year, depressing new crop prices.

Bangladesh, a country on the Ganges river delta is a stable marketplace due to limited suitable land for growing chickpea- which don’t like waterlogged conditions.

Old crop prices were hovering around the heady $800 mark in April and May this year until they started pulling back. If we consider (Figure 3), prices of that magnitude were about average for the last few years. That is, apart from 2016, when successive poor monsoon rains and droughts in the formerly key market of India drove export prices as high as $1,300, creating a balance sheet building bonanza for producers at the time.  With new crop prices currently around the $500-530 mark, prices have retreated to lows not seen since 2013. India is no longer a significant destination for Australian chickpeas though, as it imposed a 60% tariff back in 2018 as a measure to protect its domestic production capability, which Pulses Australia had described as being in structural decline only the year earlier. The Indian marketplace is distorted by government intervention and a high market support price, or MSP. Coupled with government purchasing, this is expected to encourage increased Indian chickpea plantings in 2021.

The price of Chickpeas in Australia are dictated by international demand. With Australia’s chickpea production tipped at 700Kt for this coming season, and our key markets, mainly in the Indian subcontinent only expected to purchase around 400kt, a surplus of 200Kt+ will enter storage. This surplus and reserve of grain will leave the market outlook soft for the foreseeable future. 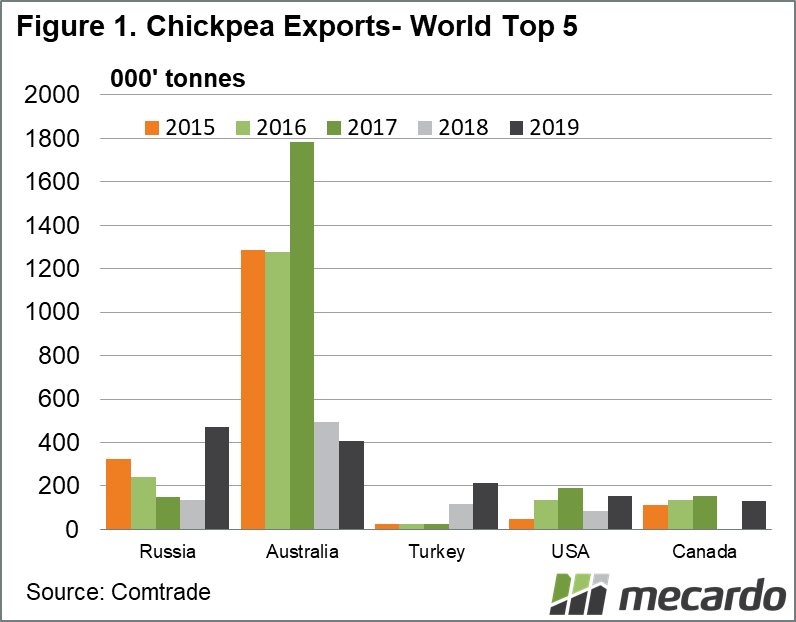