Mecardo last looked at the 14 micron category in late 2017, concluding that supply was on the rise and price would be under downward pressure as a consequence. Now 14 micron supply is falling and price has been rising strongly, so it was thought timely to have another look at this category on the fine edge of the merino micron distribution.

Since 2017, the eastern Australian sheep regions have endured extreme drought, with the exception of some of the very southern most regions. As surmised in 2017, supply rose strongly, from around 117 tonnes to 252 tonnes in the following season, an effective doubling of supply. The average combing fleece price for the 2017-2018 season was $32, slightly higher than the $30 average in the following season. However the real effect of the doubling of supply was seen in the decline in the 14 micron price ratio to the 21 MPG from 1.79 to 1.34.

Figure 1 shows the annual production of 14 micron wool in clean metric tonnes from the mid-1990s to last season. AWTA volumes for 14 micron wool are down 54% on last season (to December), an effective halving of supply. The estimate for the current season shown is based on the change in AWTA data to date. A halving of supply is the key driver in the increase in finer micron premiums seen this season, and has taken the average 14 micron price ratio to the 21 MPG from 1.5 last season to 2.6 for the season to date.

In Figure 2 the average annual price for 14 micron combing fleece (eastern selling centres, sound, vegetable fault below 2% and with no subjective faults) is shown from the mid-1990s to the season to date (to December). The nature of the price drop since the 1990s makes it hard to see the detail of what has happened in the past decade, but basically the prices have ranged between $18 and $32 clean, with the average price for the season to date around $29.

The final schematic (Figure 3) compares the annual volume (along the horizontal axis) with the annual price (the vertical axis). With the exception of the three years from 2006-7 to 2008-9, the relationship between price and supply is quite tight. As supply has increased, price has fallen. Supply would need to be 25 metric tonnes per year for price to get above the $100 per clean kg level (although the three outlier years remind us that stranger things can happen although they are a low probability bet). The supply for the season will come in well under 100 tonnes, which will help improve the chances of price lifting.

14 micron production experiences big swings, halving and doubling between years in response to seasonal conditions. In turn the big changes in supply are reflected in changes in price. Lower supply this season, and at this stage a continued lower supply in the coming season will help support the 14 micron price at the upper end of its $18 to $32 seasonal average range, which it has traded at for the past decade. 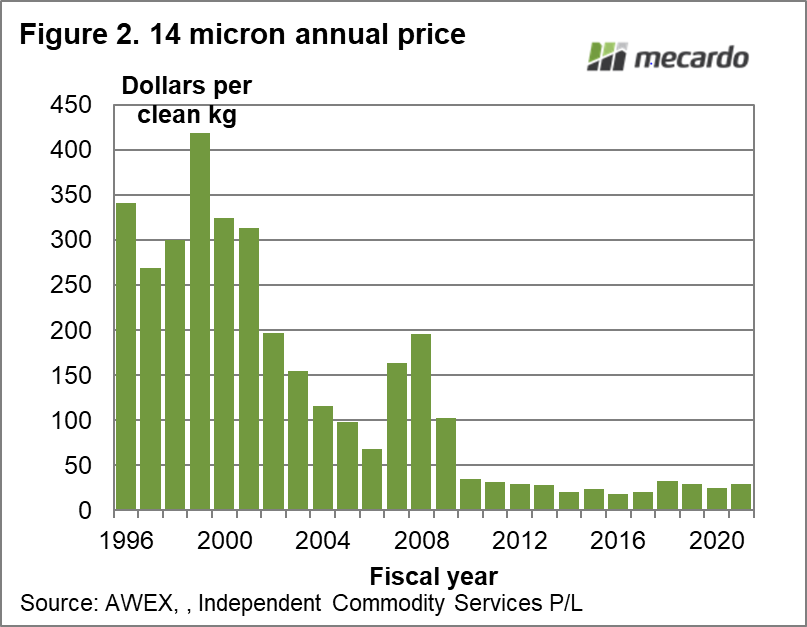 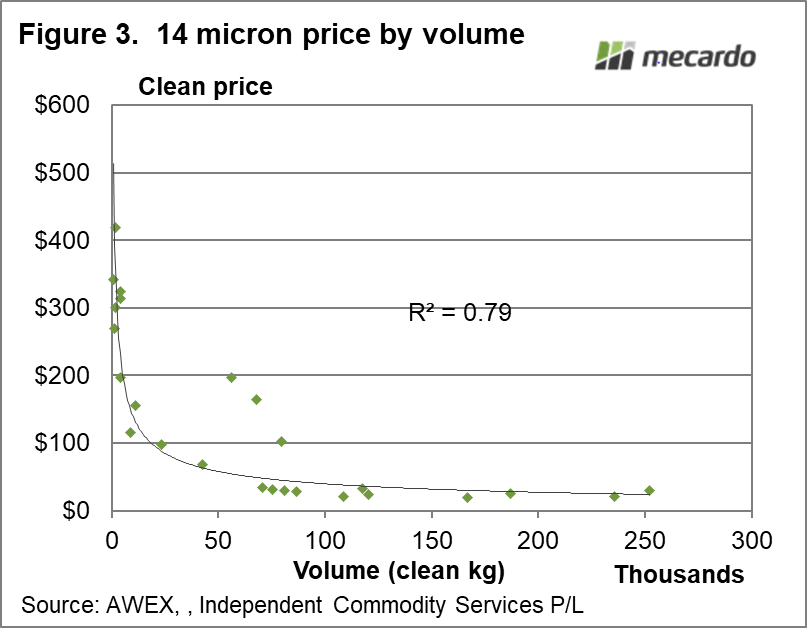