The Australian Bureau of Agricultural and Resources Economics and Sciences (ABARES) June Crop Report made some minor changes to production forecasts for the coming winter crop. The planting mix has changed from last year however, and with Canola producers set for a record income year if prices hold.

A strong cropping year and expensive livestock prices in both the east and west appear to have combined to see a record plant for the winter crop.  Despite the mouse plague and the late autumn break in parts of Victoria and South Australia the total area planted to wheat, barley and canola is forecast to gain 2.5% to a record 20.76 million hectares (figure 1).

The 20/21 plant is expected to eclipse the previous record set in 2011/12 by 195,000 ha.  The exodus of livestock from WA appears to be one of the main drivers behind the increased plant, with almost all of the extra hectare being planted there.  Eastern states plants are expected to be largely steady.

Drilling further into the planting forecast data, it appears the Westralian croppers had great foresight.  Of the 480,000 extra hectares of winter crop planted, 400,000 of them have gone into canola.

The impact of shifting plantings, and an understandable decrease in expected yields, gives expected canola production shown in figure 2.  Not quite a record canola crop nationally, but it will be for WA if it comes to fruition.

An increase in canola production combined with an increase in price will be a boom for growers.  We can use some very rough figures of $600/t for canola last year, and the current prices of $780 for the coming year, to work out extra income.  If production forecasts and prices hold, canola will bring in an extra $850 million nationally, and $650 million in WA.  This is a 35% and 65% increase in canola incomes respectively.

National cereal production is expected to be down, based largely on lower yields.  Figure 3 shows ABARES are forecasting a fall in barley production, but it will still be the fourth highest on record.  This is interesting given the spread between wheat and barley is still relatively large due to the continued heavy tariffs on exports to China.

There is still a long way to go until crops are harvested, but at this stage the season is looking promising.  If we weren’t coming off a record harvest, the forecasts for the coming year would be called a bumper.  Wheat and barley supplies will be a little tighter, but there will still be large exportable surplus, which will keep a lid on basis.

A big canola crop and huge prices will be the talk of the harvest, if it all comes to fruition.  Given the recent price rises, there is now a lot hanging on good late winter and spring rainfall, and an absence of late frosts. 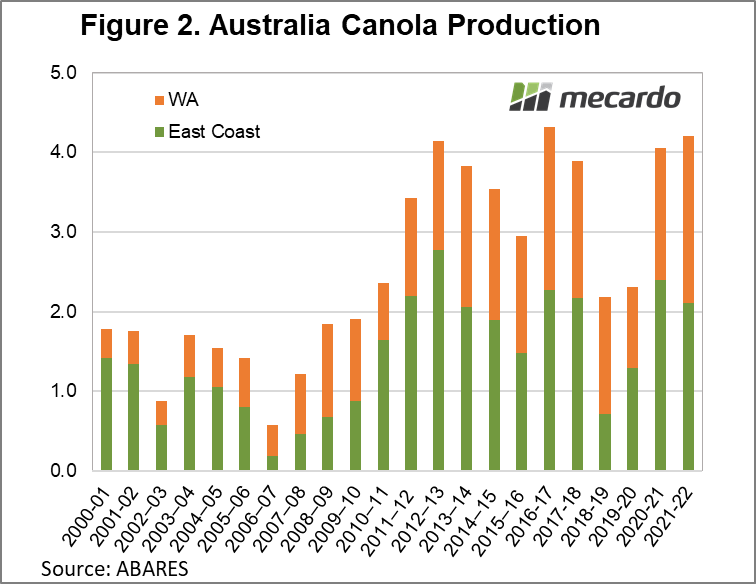 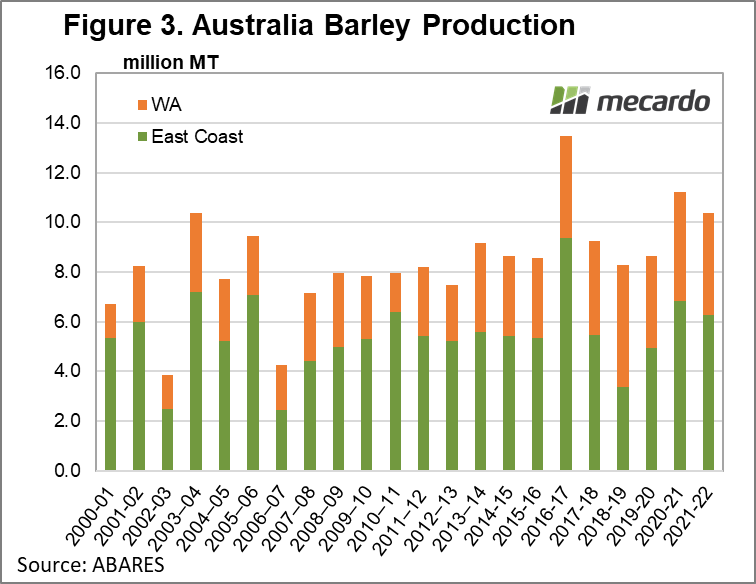