Australian beef exports hit a new low in August, seemingly not due to a lack of demand. The herd rebuild has gained pace, and the traditional low winter slaughter has limited the amount of beef available for export. Some markets have suffered more than others.

We know supplies of cattle have been on the wane. Grainfed cattle coming out of feedlots are lower, there are traditionally not many grass-finished cattle available in winter, and importantly, cows are being held for herd rebuilding.

The combination of tighter supplies of all cattle types for slaughter saw beef exports fall further in August. Figure 1 shows August beef exports hit an 18-month low of 78,021 tonnes. August exports were 12% below July, 27% below last August and 22% down on the five-year average. It was 2008 when August beef export were lower, which, from memory, was another year of herd rebuilding.

The beneficiary of the lower exports to China was South Korea.  Beef exports to South Korea were up 4% on last year in August and up 1% on July.

Figure 3 shows how China’s market share has fallen in 2020.  In July and August, China moved back to fourth in terms of export destinations, with South Korea edging past them.  Strong exports early in the year mean China still accounts for 20.2% of Australian beef exports for the year to date, but it is down from the 24% of 2019.

While Australian beef is relatively expensive, the decreases in supply appear to be counteracting any demand impacts.  Export beef prices remain good, bolstered by the manufacturing beef sector, which tends to perform well in tough economic times.

With declining supplies, and thus exports, there is some concern around losing market share in major markets.  When Australian cattle production ramps up again in a couple of years, it might take some work, and lower relative prices, to get product back into major destinations. 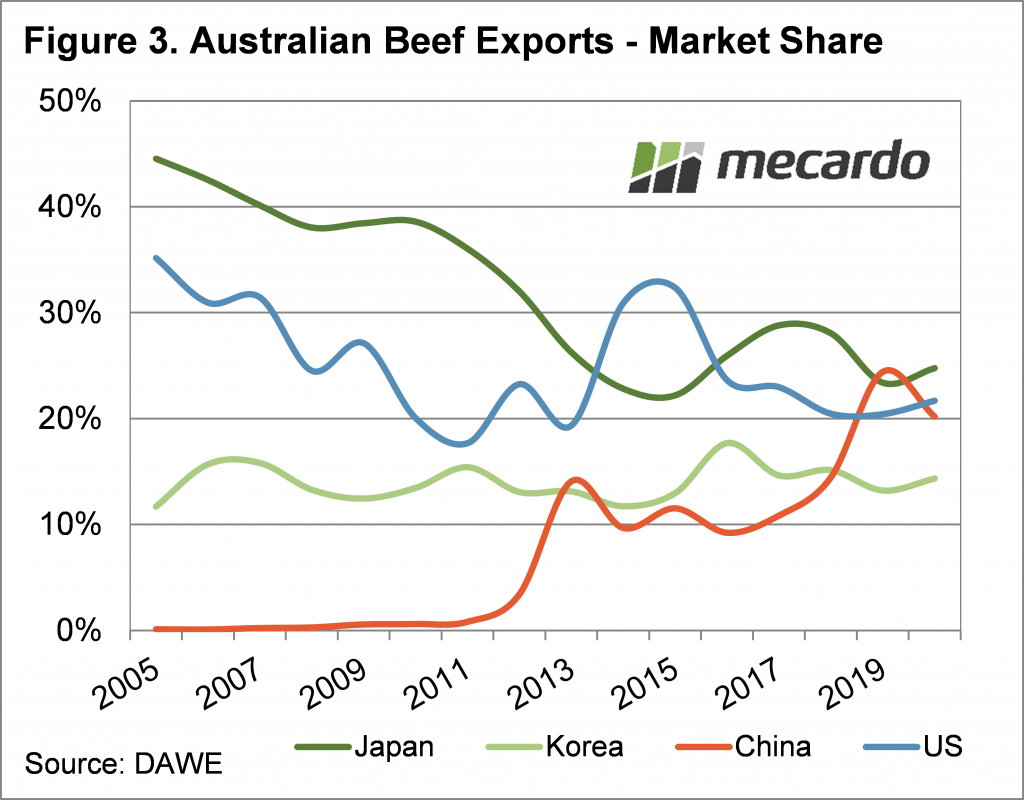