Crop delayed, but not getting smaller

Harvest is powering south, in fact, they’ve started canola across the road from where I write this, which is in south west Victoria. We know the wet weather issues that have been delaying harvest further north, but the Australian Bureau of Agricultural Resources and Economics (ABARES) has come out and forecast a record crop.

It is true that rain on the crop affects quality more than it affects quantity, especially when feed grades are still making good money, and that is how ABARES are looking at the delayed harvest. The December crop report, which was released last week, has forecasted that the good spring rains have added to the crop, with a new record winter crop set to be harvested.

In fact, there are new records everywhere, most notably in wheat and canola volumes.  Figure 1 shows the forecast for wheat production compared to the last 20 years.  A massive 34.4 million tonne crop is being harvested.  ABARES lifted NSW production by 10% and Victoria by 9%, with all other major states up by 2% on the September estimate to see a 5% national lift.

We can see in figure 1 that the east coast crop is not quite expected to match last year, but a 2.2mmt year on year lift in WA will push wheat volumes to new highs.

The canola crop had a big lift in expected production in the latest Crop Report.  Australian growers are expected to produce 14% more canola than estimated in the September report, with the increase on last year an extra 27%.  Estimates were increased for both east and west coast canola crops, with both easily setting new production records.

Canola will be the boom crop this year, with record production and record prices to combine to inject huge amounts of money into cropping areas.  The barley tariff issues with China have somewhat benefitted croppers, with the extra canola area well and truly paying off this year.

Still, plenty of barley is expected to be harvested.  The forecasts for barley production were lifted in line with wheat, and despite the area being the lowest since 2018/19, volumes are expected to be the second highest on record (figure 3).

The massive crop obviously isn’t impacting milling wheat prices, as the supply of that is going to be lower than last year.  The big impact is on feed values, which are depressed versus milling and international values.  Feed grains aren’t so depressed compared to historical levels, which is a good thing, but it’s hard to see them rising with a massive export program required to shift it offshore. 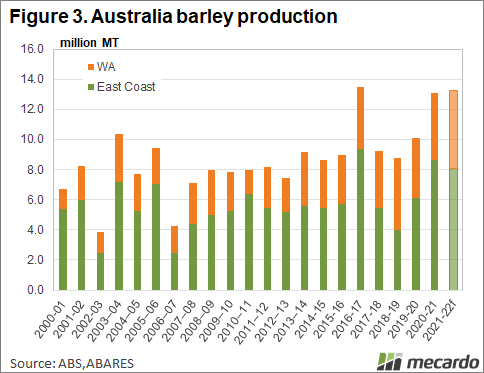