In May of 2021 Mecardo looked at the production and auction sales volume of 14 micron and finer wool in the Australian clip. In this article we update the data and have a look at how prices have tracked during the past year.

Bob Couchman (Capronex Consulting), a long-term wool metrologist, says that the effective minimum fibre diameter for wool is around 8 microns, because below that diameter the fibre cannot stand up. The delicacy of apparel made from such fibre would be unrivalled and generally impractical. Below 14 micron the volume of wool produced in Australia falls away to a couple of containers loads per year for the 13 and  sub-13 micron categories.

In the previous article (view here), 14 micron and finer volumes showed how barely any sub 13 micron wool was sold at auction. AWTA core test volumes are used as the base measure of production, which is shown in Figure 1 in annual (wool selling season) volumes from 2006-2007 onwards, with the current season to the end of April. The AWTA volume of sub-13 micron has been 200 farm bales for the past two seasons, after climbing from around 20-30 bales per season prior to 2016-17. Most of this wool is sold outside of auction, with effectively no price information available as a consequence.

Figure 2 repeats the exercise for 13 micron (12.6-13.5 micron) wool. AWTA volumes have been close to 300 bales in three of the past four seasons. The dip in 2020-21 looks to be a supply response to the low prices at the start of that season. For the current season auction sales are running at 39% of production, slightly below the decade average of 45%.

In Figure 3 the numbers for 14 micron are shown. Nearly all of the 14 micron production is sold at auction, although it has dipped to around 80% during the past four seasons. Production remains well below the peak levels seen in 2018/19 and 2019/20.

Figure 4 shows price series for 13.5, 14 and 14.5 micron from 2011 to April 2022 (average combing fleece prices). As Figures 1 and 2 show there is little to no meaningful volume of wool finer than these micron categories for developing a price graphic. The 13.5 micron price series is more volatile than the broader micron categories, with occasional price spikes in the tens of dollars. The depressed levels of fine wool prices in the 2013-2015 period stands out, trading at price levels which the 18.5-19 MPGs are currently at in 2022. Prices lift in 2018-2019, but they have really taken off since mid-2020 similar in pattern to cashmere and cotton prices.

The production of sub-13 and 13 micron wool has not changed greatly in recent seasons, so the higher prices seen since mid-2020 are being generated by improved demand. The volume of 14 micron remains well below the peak levels of 2018-19 and 2019-20, so lower supply might be helping prises for this category. All in all prices for these fine micron categories are doing well by the standards of the past decade. 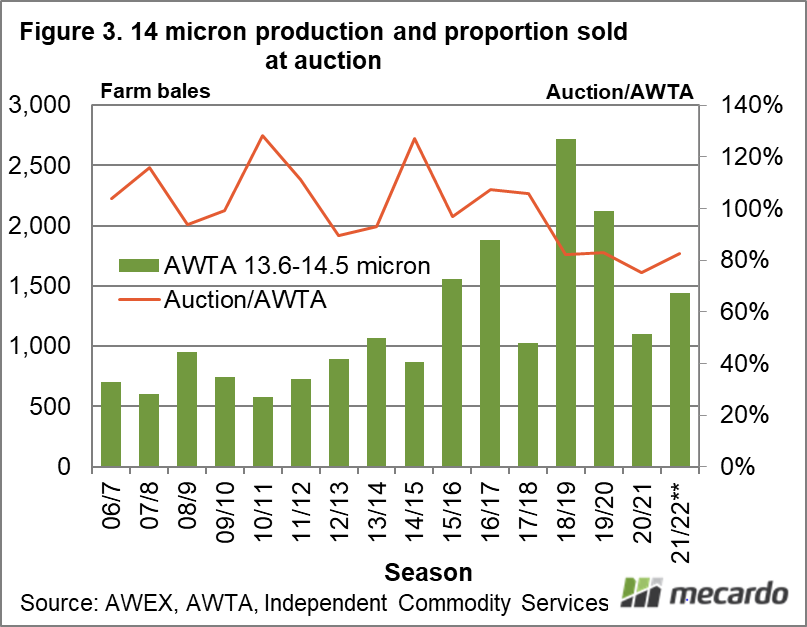