Following from last week’s USDA report, the wheat market has continued to edge higher. Russia’s proposal to place export quotas on wheat by Jan next year, will likely be the driving force in the wheat market for the next six months. In the midst, will be weather concerns - especially in the major exporter countries and South America.

Temperatures in the Northern Hemisphere are starting to cool, to a point where winter wheat will harden off and slowly become dormant.  Ukraine is reportedly at 89% sown and unlikely to complete their intended sowing program.  While the crops are believed to be in good condition, the shortfall in observed precipitation is building and will require watching over winter.

It is also worth while keeping an eye on our friends in Canada.  After a shocking drought, the same areas of the Canadian Prairies and the northern US Plains remain dry.  These areas are typically spring sown crops – wheat, barley, canola, pulses etc – but the lesson learned this past season, is that soil moisture is critical.  The Canadian farmer in particular is going to have to make some hard decisions on crops that performed badly in the extreme conditions, but also reassess crops with high inputs given the price and scarcity of fertiliser.  Similar to Australia, do we see a swing towards pulses at the expense of barley and canola?

While in Canada, the province of British Columbia endured a one-in-500yr type of rain event that has cut critical road and rail routes to the Port of Vancouver.  There is enough supply for 4-7 days of exports, but beyond this, the movement from the Prairies to the Port is effectively cut and may stay impacted for a couple of months.  Our thoughts go out to the displaced and families of the missing and dead.  From an agricultural perspective, it is yet another ‘black swan’ event that will increase the pressure on supply.  Even though the exportable volume of the Canadian crop is significantly reduced, the inability to access the Port, will put a noose around already tight supplies of wheat, barley, canola and lentils.

Lastly, what’s a weekly report without some left field scenario poised to completely derail any kind market clarity we think we might have?  Rumours have been swirling for months that the Biden Administration were looking long and hard at the biofuel RFS (renewable fuel standard).  The thought is that the EPA will cut the mandated RFS in line with environmental policies aimed to reduce the use of fossil fuels.  It seems counter intuitive, however the expectation is for subsidies instead to flow to electric vehicles.  As a reminder some 30% of US corn and soybean production is used to make ethanol and biodiesel respectively.  A phasing out the RFS would see a major shift in demand and the corresponding price.

The bottleneck in Vancouver will see importers likely switch origins to fulfil their demand.  With rail services potentially not coming back online for 2 months, this will place greater demand on Australian, Black Sea, European and US supplies.  We would also expect to see the prices of peas and lentils increase as the world’s dominant supplier lies idle. 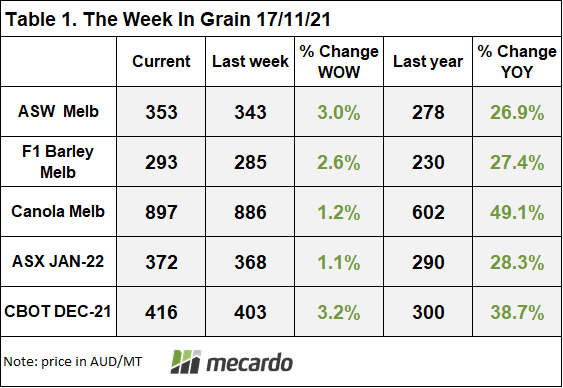