Sheep and lamb offtake – an update

It is the start of a new season and a time when the supply chain looks forward in order to assess supply in the coming year. In this article we update the sheep and lamb offtakes, as a guide to coming changes in the flock size.

Mecardo last looked at the sheep and lamb offtake in mid-March. The sheep and lamb offtake (sales off-farm to abattoirs) are highly correlated to changes in the flock size. It gets better as the change in flock size is lagged to the offtake levels by one to two quarters (three to six months), so the offtake provides a short term forward indicator with regards to flock numbers. The usual caveat applies that spring rainfall is crucial to seasonal conditions in southern Australia, but at this stage things, in terms of soil moisture and pastures, are generally looking positive.

Figure 2 repeats the exercise with the lamb offtake. It fell through 2020 as farmers held some young sheep back given the improvement in seasonal conditions (and presumably because strong cashflows also allowed this). The lamb offtake stabilised around 30% in early 2021 and has stayed there. This looks to be around 3% below peak levels so the assumption is that farmers are holding around 3% of the flock size in lambs back to help boost numbers.

In Figure 3 the sheep offtake is augmented with the change in the lamb offtake. The 3% of lambs assumed to be held back are deducted from the sheep offtake as a way of combining the two. If the lamb offtake were to rise, then this would result in an increase in this combined offtake. The combined sheep/lamb offtake has bounced in recent months from very low levels, but remains at flock expansionary levels. It finished the 2020-21 season at 6.4%, which is 5.6% below the neutral level, implying an increase in the flock of 5-6% in 2020-21. These estimates are subject to the national weaning and death rates in the flock. However, the number of sheep and lambs sent to abattoirs has the advantage of being actual numbers, rather than estimates.

The Australian sheep flock looks set to increase in size again in 2021-22, which should help increase the supply of both lamb and wool (merino and crossbred). For lamb and merino wool this is a golden time to increase production given the strong prices available. 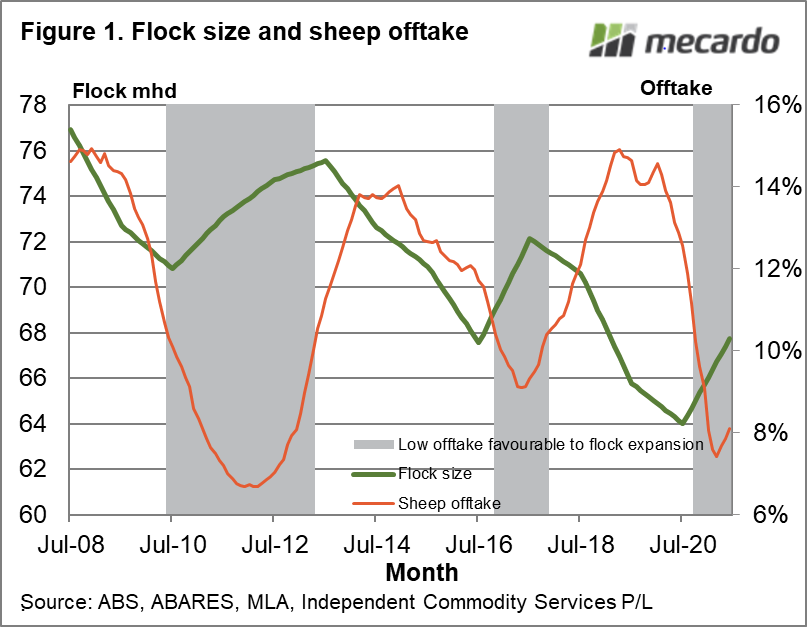