Another week of below average yardings and low slaughter has finally produced a small uptick on the EYCI this week. Feeder and processor prices lifted, however, the heavier side of the market suffered, with medium cows and steers dropping back, along with heavy steers. The Aussie dollar has also strengthened on the back of higher expected US inflation and rallying commodity prices.

The uptick in yarding’s reported last week couldn’t be sustained, with numbers on offer dropping by 13%. VIC and QLD drove the change, falling 23% and 17% respectively.

Slaughter remained fairly stagnant last week, but it’s still running at 24% below the five-year average, so kill rates are still struggling along.

The EYCI finally made a sluggish, but welcome move upwards, putting on 5¢ (<1%) for the week to reach 863¢/kg cwt. If low slaughter and low yarding’s continue to support the price, we can probably not expect much more news on this front.

Moving across to the west, the WYCI is in star territory though- at 937¢/kg cwt, it’s sitting proud at a 9% premium to the EYCI, and is up 34% on the same time last year.

The national category indicators were a mixed bag, weighed down with negative movements on the heavier side of the market, and vealers saw their first price fall in quite a while, however processors and feeders finished up in positive territory.

Restockers were relatively stable, backing off just 1¢ (1%) to 519¢/kg lwt, continuing the decline since the highs seen in mid-January, when prices were 7% higher at 560¢/kg lwt.

Vealers also took their first tumble for a few weeks, losing 4¢(1%), easing back to 502¢/kg lwt, but the upward charge they have been on from the $4 mark last August still has solid fundamentals behind it as very young cattle are just too valuable to slaughter early.

The Aussie dollar rose strongly by 1.3% to tick up to 0.779US. Biden’s generous, and possibly overdone 1.9 trillion-dollar stimulus plan has expectations of US inflation leaping upwards. American households earning less than 150k will all receive a $1400 boost as part of the plan. Strong commodity prices have also boosted demand for the Aussie dollar. The 90CL saw a little rise, adding another 6¢ (1%).

It’s still looking pretty dry going into autumn for NSW and VIC, with only a sprinkling of 5mm expected to come through. Sunny QLD is a very different story though, with a solid 25-50mm expected to come down the coast over the next week.

Historically, yardings tend to trend downwards this time of year, and the slack to rising pricing situation we have this week suggests there will be more of the same on offer, particularly for young cattle. Next week we can expect some more good support from low supply coming up. 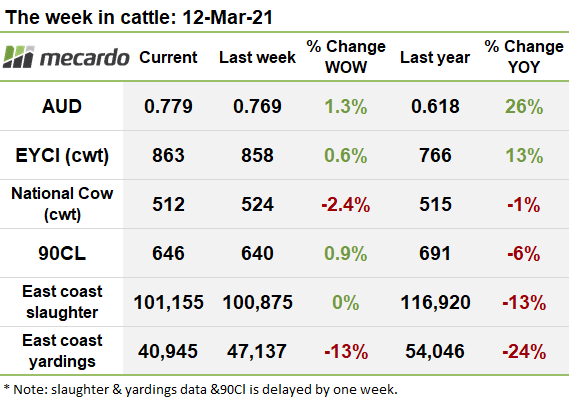