The varying value of AWEX MPGs

AWEX wool market indicators (the MPGs primarily) do an excellent job in maintaining transparency in the Australian greasy wool market, but their relationship to the average prices paid has varied through time due to structural changes in the market. This article takes a brief look at the changing relationship of key AWEX MPGs to the greasy market.

AWEX indicators (AWEX micron price guides) concentrate on fleece prices which is logical as fleece accounts for the majority of income for wool clips. However, over the past two decades merino discounts for short staple length, low strength and pieces/bellies have trended smaller. This change in market structure has changed the relationship between the AWEX MPGs and average prices paid in the market.

Figure 1 shows the annual average 17 micron price paid for all lots that measured 17 micron, regardless of category or fault, as a proportion of the eastern 17 MPG which began in mid-2003. Between 2004 and 2009 the average 17 micron price ranged between 75% and 80% of the 17 MPG. By 2014 it had lifted to 90% of the 17 MPG where it has stabilised give or take 2-3%. From a budgeting perspective there is a lot of difference between achieving 75% and 90% of the indicator. The 16 micron category exhibits a similar trend, where an average combing fleece price is used in the absence of an MPG in the calculations.

Figure 2 repeats the exercise for the 19 micron category, with the graph running from 1995-96 to the current season. It shows a similar trend to the 17 micron category with the average price rising from around 75% of the MPG in the late 1990s to 91-92%. This trend means the AWEX MPG has improved in its role as a reflection of the market.

On the broader side of the merino micron distribution the increase in the average price in relation to the MPG (21 micron in Figure 3) started from a higher base, so there has been less of a change. For 21 micron the average price has lifted from around 85% of the MPG in the late 1990s to now range between 92% and 95%.

Beyond 21 micron the story changes as the proportion of merino wool has fallen away with the proportion of crossbred wool rising. Figure 4 shows the analysis for 23 micron wool, with the trend falling which means the average price of 23 micron wool is now a lot less in relation to a 23 MPG than it was in the late 1990s. In the late 1990s nearly all of 23-micron wool sold at auction was merino (~97%) whereas now it is under half (running around 44% for the current season). Finer crossbred wool tends to be crossbred lambs which have a lower value hence the average price now tracking in the 70% to 75% range.

The change in the relationship between the average sale price and MPG for the medium and finer merino categories is a tidy demonstration of how discounts in the market have shrunk during the past two decades. It means the AWEX MPGs are better as a guide to budgeting and pricing than they were. On the very broad edge of the merino distribution the varied structure of the market in terms of breeds means that AWEX MPGs struggle to reflect the market well. 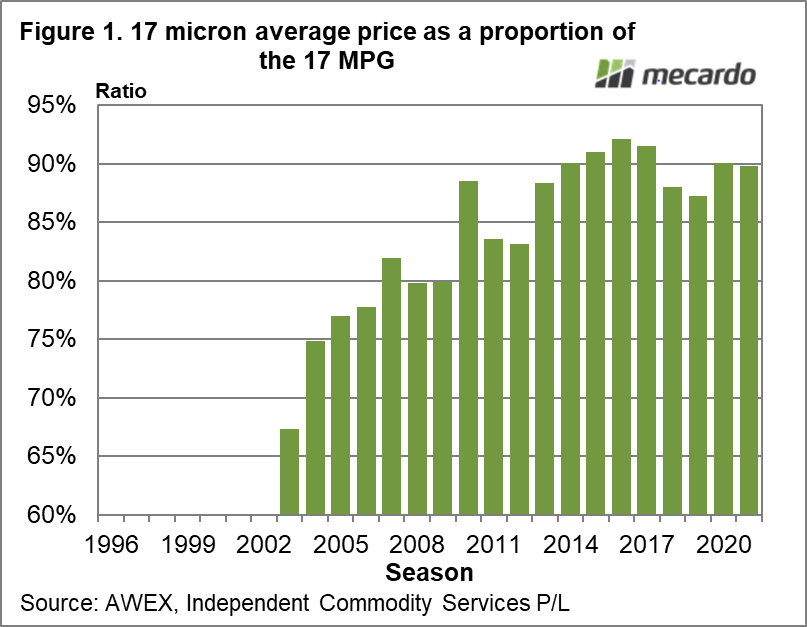