They found enough feeders to maintain the million head

Lotfeeders have been a major contributor to keeping finished cattle flowing through processors over the last three years. There was a school of thought that with more grass available, lotfeeders might struggle to maintain supply, but to December at least, there were still over 1 million cattle being finished on grain.

After three quarters on the slide, cattle on feed numbers ticked up in December.  While still 15% off the record set in December last year, the number of cattle on feed managed to rally 3.8% to 1.048 million head.

While the biggest feedlot state, Queensland had a small decline in cattle on feed, it was compensated by NSW, Victoria, SA and WA, which had 6%, 21%, 11% and 22% increases respectively.

Figure 1 shows that it was both lower marketings and higher placements of cattle that led to the increase in cattle on feed.

The supply of feeder cattle was up in the December quarter, compared to the September quarter.  Queensland, NSW and SA all saw small increases in placements of cattle on feed, but in Victoria, a 39% lift helped drive national figures higher.  WA placements were down 47%, which is largely seasonal.

Placements were way back on December last year, falling 17% on a national level.  The better seasonal conditions, and lower supplies coming through are no doubt responsible for fewer cattle being placed on feed.

Lower marketings are not unusual for the December quarter, especially in southern states where grassfed supplies increase in the spring.  It was WA where marketings fell the most, down 73%, and at half the levels of last December.  Victoria and SA marketings were also down, but NSW increased by 15%.

Nationally cattle marketings were down 9%, and at their lowest levels since December 2016.  The four year low in grainfed cattle supplies showed up in total cattle slaughter for the December quarter.  Figure 2 shows that despite the low grainfed supplies, very weak grassfed slaughter saw grainfed cattle still make up 41.5% of slaughter. This is the third highest proportion on record, and illustrates the shift towards using grain to finish cattle.

Despite the higher numbers of cattle on feed in the December quarter, finished cattle have managed to maintain extreme highs through the first part of the year. We can likely expect the proportion of grainfed cattle in slaughter numbers to be higher again, as processors continue to rely on their supply.

Consistently high numbers of cattle on feed is good for feed demand, and therefore price. While processors need grainfed cattle to prop up kills, prices for feeders should find support as there is plenty of competition for them. 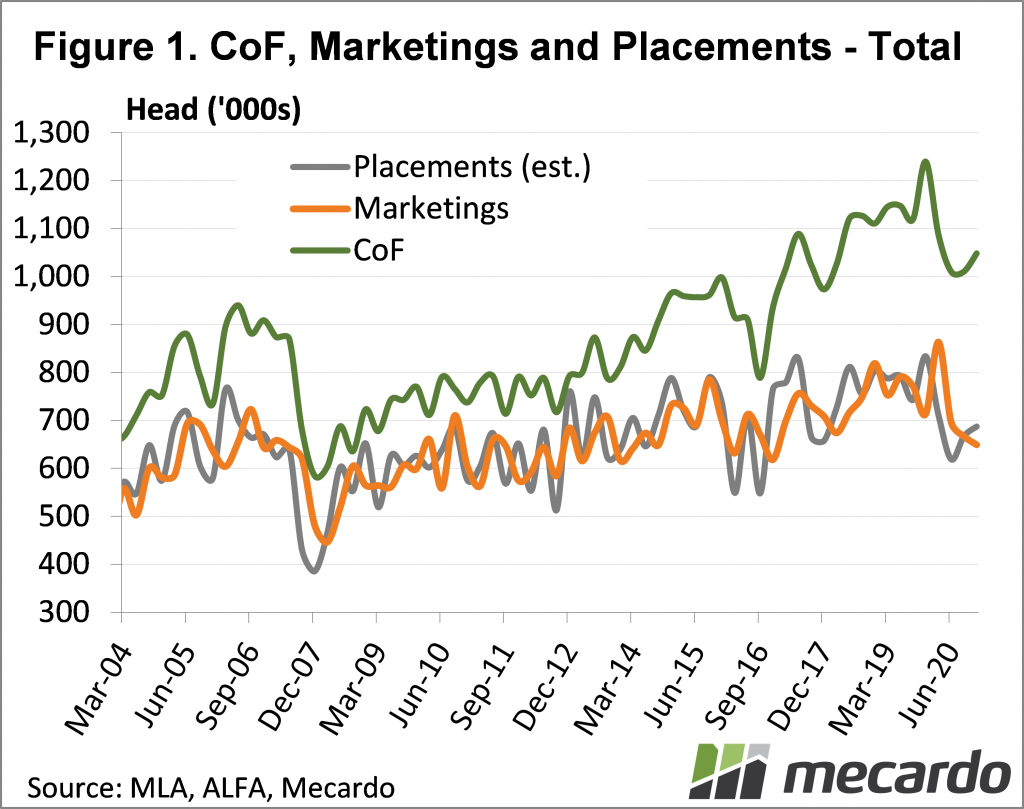