In this article Mecardo has a look at the rolling five year price ranks for Merino wool against a range of other non-wool apparel fibres, to check whether merino prices are following the general flow of apparel fibres (which is normal) or going their own way.

Percentile analysis of prices allows us to step back from the fine detail of price levels and look at what is cheap, fair value and expensive. This allows for the comparison of different fibres which operate at varying price levels, which are not necessarily directly comparable.

In Figure 1 the rolling five year price rank is shown for the average Merino micron price in US dollar terms from the mid-1990s to August 2020. The second series is a simple average of the price ranks for polyester staple fibre (PSF), acrylic, cotton and viscose.

As shown in earlier articles the merino rank tracks the rank of the average fibre series fairly closely. In 2002 the merino rank broke away as the greasy market rose strongly after the liquidation of the RPS stockpile. The greasy wool market generally rises strongly in the 12-18 months after stockpiles have been liquidated. With the build-up of a new stockpile as a consequence of COVID-19, the industry can expect a similar stockpile liquidation rising price cycle at some stage in the coming decade.

The 2018 cycle was a strong one for Merino prices as Figure 1 shows, and less so for the average of the other fibres. Price ranks all started to fall in mid-to late 2018, hitting five year lows this autumn as the pandemic butted onto an existing cyclical downturn.

Unfortunately the average fibre price rank simply echoes the fall seen in the merino series. Pandemics are proving to be a tough operating environment for apparel fibres.

On close inspection the average fibre rank in Figure 1 has picked up in the past couple of months. This is due solely to the cotton price rank. In Figure 2, price ranks from mid-2018 are shown for Merino and component fibres of the average series shown in Figure 1. In the first half of 2020 all fibres fell to a rank of zero (five year lows) with only cotton rebounding. An article by myself, here at Mecardo  last week, showed cotton prices to be trading at very high ratios of PSF prices, which is traditionally an opportunity for PSF to steal some market share from cotton.

In one respect, this article can be summed up as ‘nothing to see here, move on’ as the merino price has followed the general lead of apparel fibre prices by falling to five-year lows. It is unusual when wool prices have a different cycle/trend to the general apparel fibre market complex. Something for the longer term is a prospective re-run of the 2002 market in the coming decade, when the current building greasy stockpile which is finally liquidated. 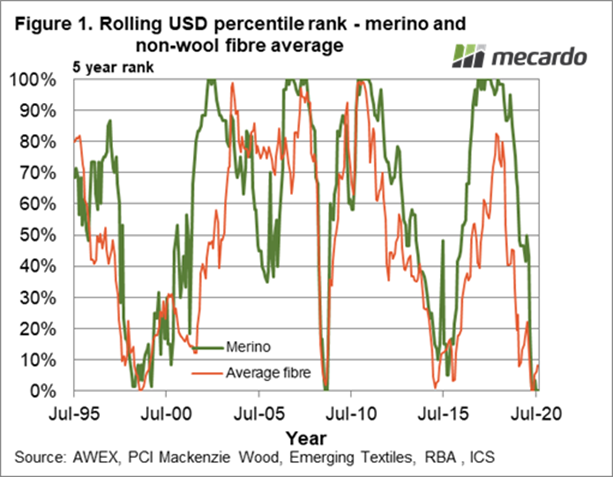