This week saw the largest offering since August last year, with ‘plenty of stylish wool’ on offer according to AWEX. It also included a special Tasmanian sale in Melbourne, with 6,000 bales coming from the Apple Isle. The market fell slightly overall but performed quite well considering the large amounts of wool on offer.

The Eastern Market Indicator (EMI) fell again this week, slipping 2ȼ on last week to close at 1,420ȼ. The Australian dollar continued to strengthen, improving by 0.47ȼ with the AUD quoted at US$0.7214. This resulted in the EMI in US dollar terms moving up by 5 cents to settle at 1024ȼ.

In contrast to the EMI, the Western Market Indicator lifted by 8ȼ to finish the week at 1451ȼ, in part due to the fact the western markets fell significantly lower than the eastern states last week. All indicators lifted between 16 to 27ȼ in the west bar cardings which fell by 6ȼ. Fremantle sold 8,318 bales while passing in 9.3% of the offering.

Crossbred wools were mixed also, with the 26 & 32 MPG in Melbourne lifting by 20 & 4ȼ respectively, whilst the others recorded small falls. Cardings in Sydney & Fremantle were 10 & 6ȼ weaker whilst Melbourne didn’t budge.

On Mecardo this week, (view article here), Andrew Woods took a closer look at the profile of the Australian wool clip using ABARES sheep industry survey data, concluding that the top 30% of farms account for two-thirds of wool production whilst the bottom half of farms in terms of size account for around 20%. Details of breed distribution across the profile are not included, which would give a clearer picture of the industry structure.

Another large offering next week of 50,142 bales listed with all centres selling on Tuesday & Wednesday, with Melbourne selling on Thursday again. 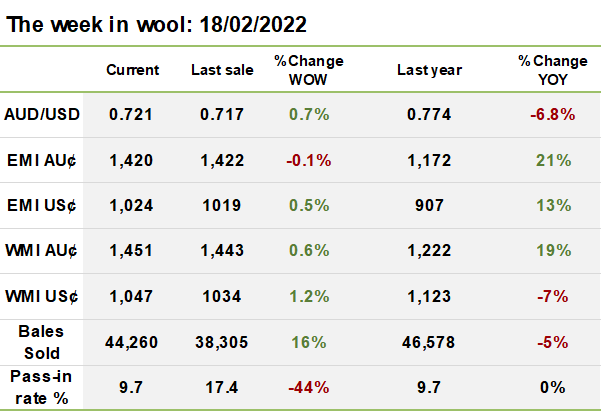 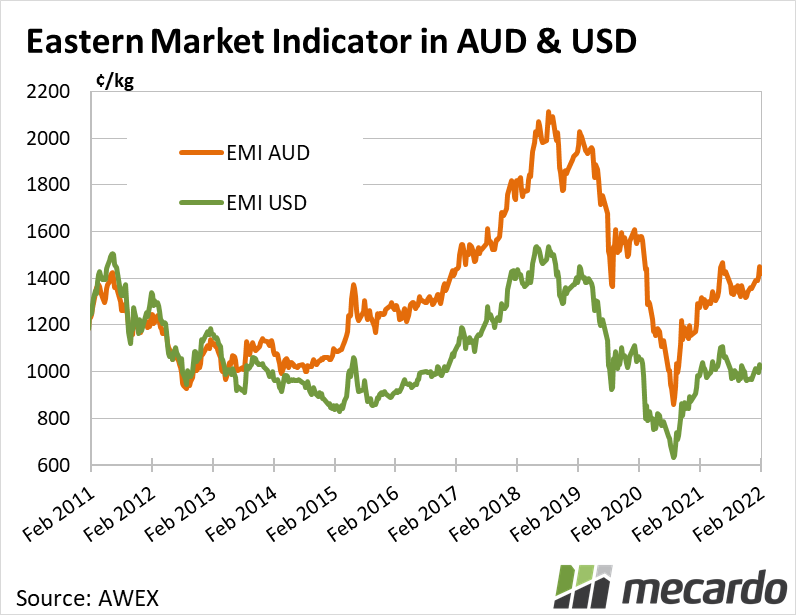