In the search for some “green shoots” of price recovery in the wool market, the fine end of the clip (especially in Melbourne), and the Cardings (especially in Sydney) demonstrated modest recoveries this week. This was on the back of an reduced offering from last week by 12,600 bales, resulting in a low clearance of 18,195 bales. Average weekly clearance for the season to date sits at 27,146 bales.

The EMI was lower due to the fact the medium micron categories were all lower, however fine types showed a stronger tone. In Melbourne, the 17 MPG indicator lifted 23 cents, although for contrast the 20 & 21 MPG’s were softer by 41 & 46¢ respectively.

This week on Mecardo, Andrew Woods had a look at the fine wool premiums, noting that “16 micron fleece has now returned to a “normal” premium over 19 micron fleece. The rise in the premiums is a good example of how supply influences market premiums and discounts but not the overall trends and cycles of the greasy wool market.This reinforces the detrimental impact that drought has on fine wool prices, as an over-supply of drought effected wool weighs on the fine wool market.

AWEX reported that the prices for Merino fleece this week was “varied”, dependant on micron. Fine types showed a dearer trend while the medium Merino and crossbred wool had another down week.

Cardings reversed their trend of the past 2 months to post increases, with a 42¢ lift in Sydney while Melbourne showed a more modest 6¢ gain.

Next week Fremantle returns to selling which will add supply pressure back onto the market.

There are 32,900 bales listed which will be a huge challenge in this demand scenario, noting that this week the market absorbed just 18,100 bales. 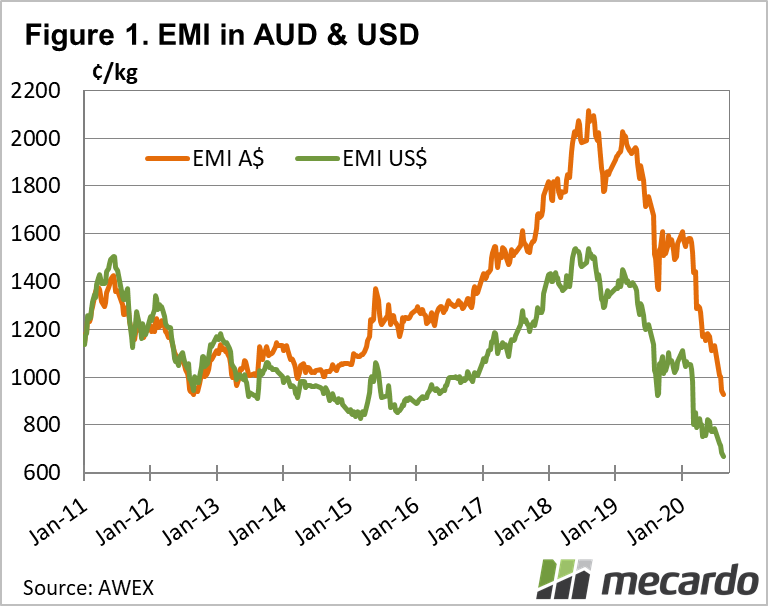