This article follows on from one earlier in the week, which was a preliminary look at the volume and value of wool produced in northern Queensland (which by volume is mainly central west Queensland). Wool out of this region matches up to the average merino production out of Australia except for one intriguing aspect.

When the price differential between the two series is calculated using AWEX eastern MPGs, it shows that since 2002 the price difference due to fibre diameter to be 3.2%, which explains the bulk of the northern Queensland average clean price discount to the national merino price (see earlier article from this week).     This implies that all the other quality characteristics which make up the wool from northern Queensland in total account for a discount to the national merino value of 0.3%, effectively meaning the northern merino clean value per kg matches the national average value when adjusted for micron.

The clean value of the northern Queensland clip, when adjusted for fibre diameter, effectively matches that of the national average gross value. From a price perspective on average wool from central west Queensland matches that of the rest of Australia. In terms of CM-NM declarations, northern (and southern) Queensland is well ahead of the average Australian levels (by an order of three). There is a separate story in this alone. 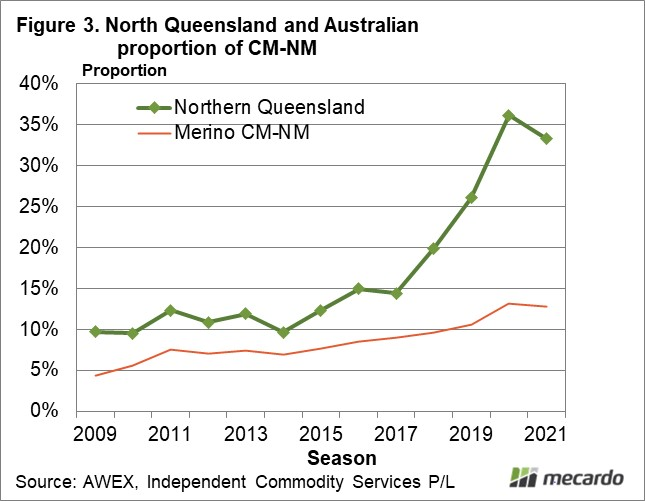